Back to top of page

Each year, more than 28,000 viable organs are wasted. Despite scientific advancements, the organ donation system is held back by poor management and performance. The U.S. government could save tens of thousands of lives and billions of dollars by holding contractors to more rigorous standards and modernizing the technology within the organ transplant ecosystem.

When people hear “organ donation,” they might only think about a box they checked off when renewing their driver’s license. While checking that box can be a helpful first step to saving lives through organ donation, most people don’t realize that there is a huge ecosystem behind what makes organ transplants happen — or not happen. People might assume because organ donation is so important, the system must be well-run. But in reality, it’s not. In fact, Americans are unnecessarily losing thousands of lives and billions of taxpayer dollars each year from what’s broken in this system.

The Effects of a Broken System

Today, the medical community continues to make advancements in the field of organ donation and transplantation. Yet this life-saving science relies on an outdated system that has failed to scale up to modern day management and technology best practices.

How does this system hurt Americans? Imagine you need an organ and manage to join the 109,0001 people on the waiting list – which in itself can be a challenge.2 Once you’re over the hurdle of getting on the list, you have only a 50% chance of receiving the organ you need within the next 5 years.3

The problem is even worse for people of color,4 who are less likely to get on the waitlist5 and less likely to find a match once they’re on there.6 Black families are also less likely to even be asked about donation – and face lower quality interactions when they are approached7 – which contributes to the low match probability for Black patients.8

One might think with all the people on the waitlist, and with 90%9 of Americans supporting organ donation, that nearly all viable organs from deceased donors will get used. But disturbingly, that’s not the case. Less than half of people in the U.S. who meet established criteria for organ donation actually become donors.10

That means around 28,000 life-saving organs every year, on average, are not transplanted.11

Additionally, taxpayers could save $40 billion in 10 years if more organs were recovered, according to research.12 Without a transplant, patients with kidney failure have to rely on costly and painful dialysis. Medicare currently spends $36 billion13 every year on dialysis and treatment for people with End Stage Renal Disease – which is more than the annual budget for NASA14 and the CDC15 combined.16

“[A]n astounding lack of accountability and oversight in the nation’s creaking, monopolistic organ transplant system is allowing hundreds of thousands of potential organ donations to fall through the cracks.”

After speaking with organ procurement organization (OPO) leaders, transplant centers, government officials, and other organ donation experts, our findings reveal a number of critical issues with how the organ transplant system has been built and continues to run. There are several root causes that illustrate the need for change.

Responsibilities around organ donation and transplantation in the U.S. are diffused across several different government agencies and contractors (see “Governance and Oversight in the Organ Donation Process,” Figure 1), leading to an unnecessarily complex — and conflicted — structure. 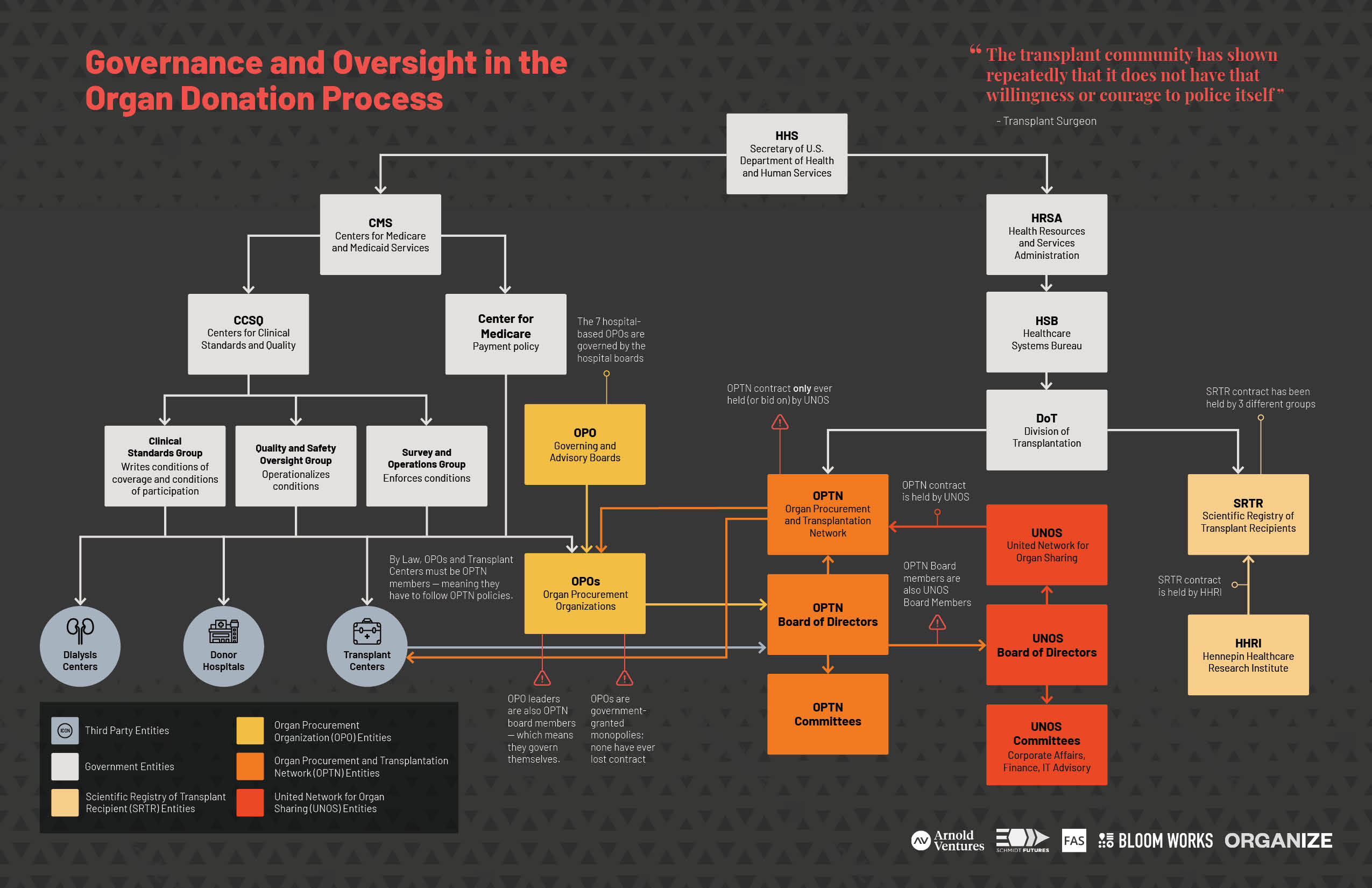 Download the “Governance and Oversight in the Organ Donation Process” PDF

“It’s a perfect complexity; everyone is focused on their own problem, and ignoring the rot underneath.”

When Congress passed the National Organ Transplant Act (NOTA) of 1984, the government established the Organ Procurement and Transplantation Network (OPTN) and mandated that it be operated by a private contractor. The contract is currently overseen by the Health Resources and Services Administration (HRSA) under Health and Human Services (HHS). The only contractor who has ever held the contract is the United Network for Organ Sharing (UNOS). (See “Organ Donation Policy,” Figure 2.) 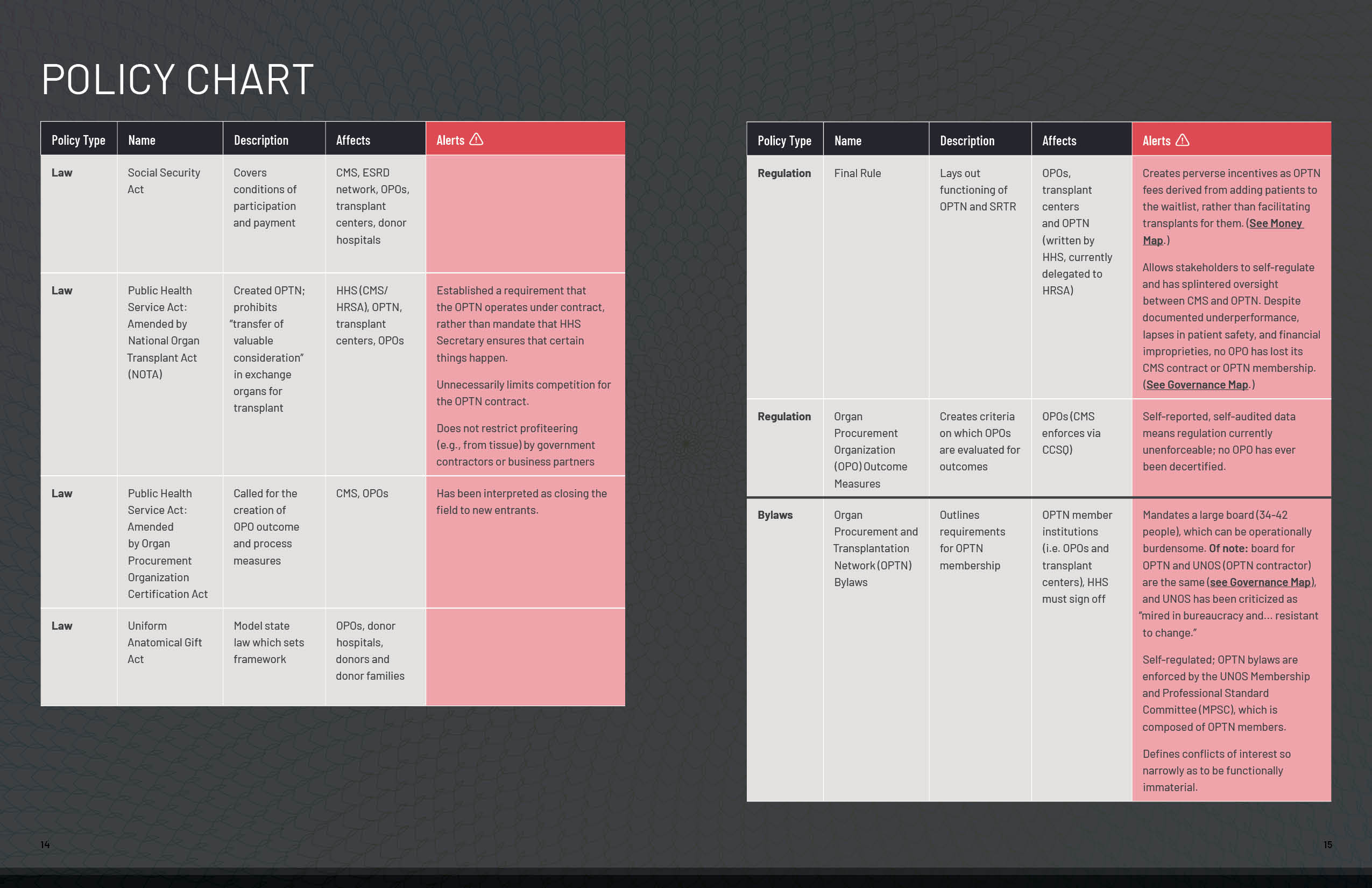 While HRSA is responsible for the regulation and oversight of the OPTN, another HHS agency, Centers for Medicare & Medicaid Services (CMS), is stuck footing the bill. Government contractors who coordinate organ recovery, known as organ procurement organizations (OPOs), are 100% reimbursed for all expenses, and OPOs’ failure to recover enough kidneys contributes to billions each year in taxpayer dialysis costs. CMS and the OPTN are also both responsible for overseeing OPOs, which we discuss more below.

Rather than working together to solve problems that arise, the existing governance structure enables each arm to pass accountability back and forth, resulting in issues falling through the cracks. As one interviewee explained, HRSA and CMS tend to pin problems on each other, and rely on the OPTN contractor, instead of working together to create a cross-HHS solution.

“There’s a sensitivity to addressing the controversies because then HRSA has to admit that there was a problem there in the first place that they allowed [or] didn’t fix. So they point instead to some other problem. It’s a conflict-avoidance strategy.”

OPOs play the vital role of procuring organs, finding a matching recipient, and delivering those organs to transplant centers for the actual procedure. Each of the 58 OPOs in the U.S. operate without competition from any other organizations in their respective regions, effectively making them monopolies. In addition, there is no standard way that OPOs operate. This leads to a wide variance of performance — up to a 470% difference between the best and worst OPOs in terms of potential organs recovered.17

“The greatest gap between where we are and where we wanted to be could be covered by having every OPO operate as effectively as the most effective OPOs.”

A recent CMS proposed rule has shown that a majority of OPOs are failing basic proposed outcome metrics,18 resulting in many organs going unrecovered, mishandled, or even lost. (See “The Most Frequent Causes of Wasted Organs”)

Despite massive underperformance, no OPO has lost its government contract in the nearly 40 years the system has operated.

Even though OPOs are technically overseen by the OPTN and CMS, they largely act unchecked, providing unverified, self-reported data.

“There is no provision for even random audits of the data submitted by OPOs to assess the accuracy of the data reporting. All data are self-reported and unverified.”20

The current flow of money and costs (see “Organ Procurement Money Flow,” Figure 3) between agencies and federal contractors overseeing organ procurement and placement does not incentivize getting patients transplants. 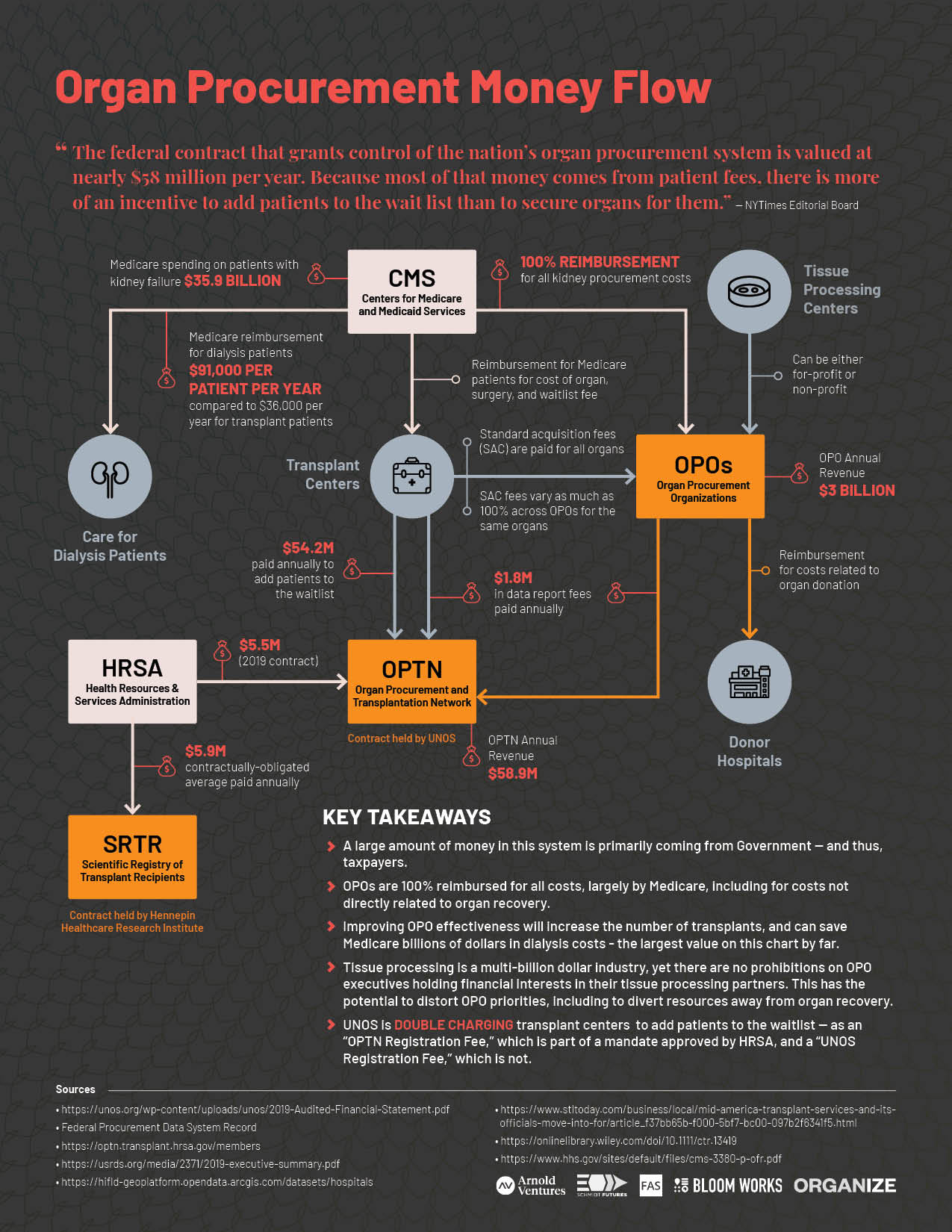 The federal contractor in charge of overseeing the U.S. organ procurement system, UNOS, earns about $58 million a year, with the bulk of their revenue coming from transplant centers paying to add patients to the organ waitlist.

“Because most of that money comes from patient fees, there is more of an incentive to add patients to the waitlist than to secure organs for them.”21

UNOS has held the contractor position exclusively since 1986. Since that time, the waitlist has grown considerably.

The current system also does not incentivize OPOs to pursue all donation opportunities. For example, OPOs may deprioritize “low-yield” candidates, for lack of either financial or regulatory pressures to recover and place all transplantable organs. This can result in them rejecting, or simply not showing up for, older donors with only single organs available22 — even though those single organs could each save a life.

While not all patient referrals are clinically able to become donors, a study commissioned by HRSA suggests OPOs are only recovering an estimated “one-fifth of true [donor] potential.”23

The Most Frequent Causes of Wasted Organs: 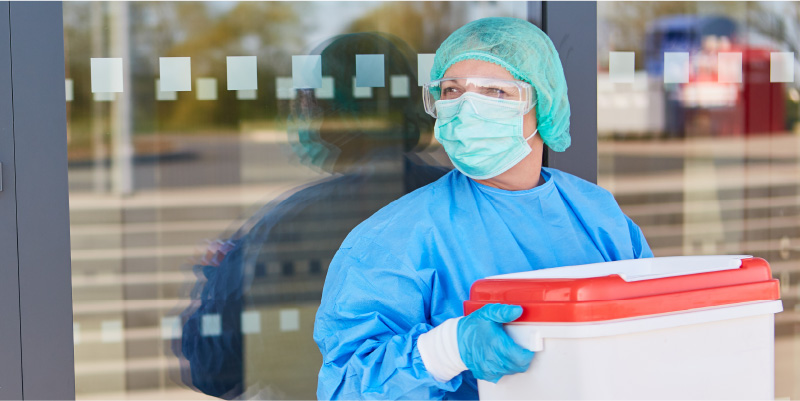 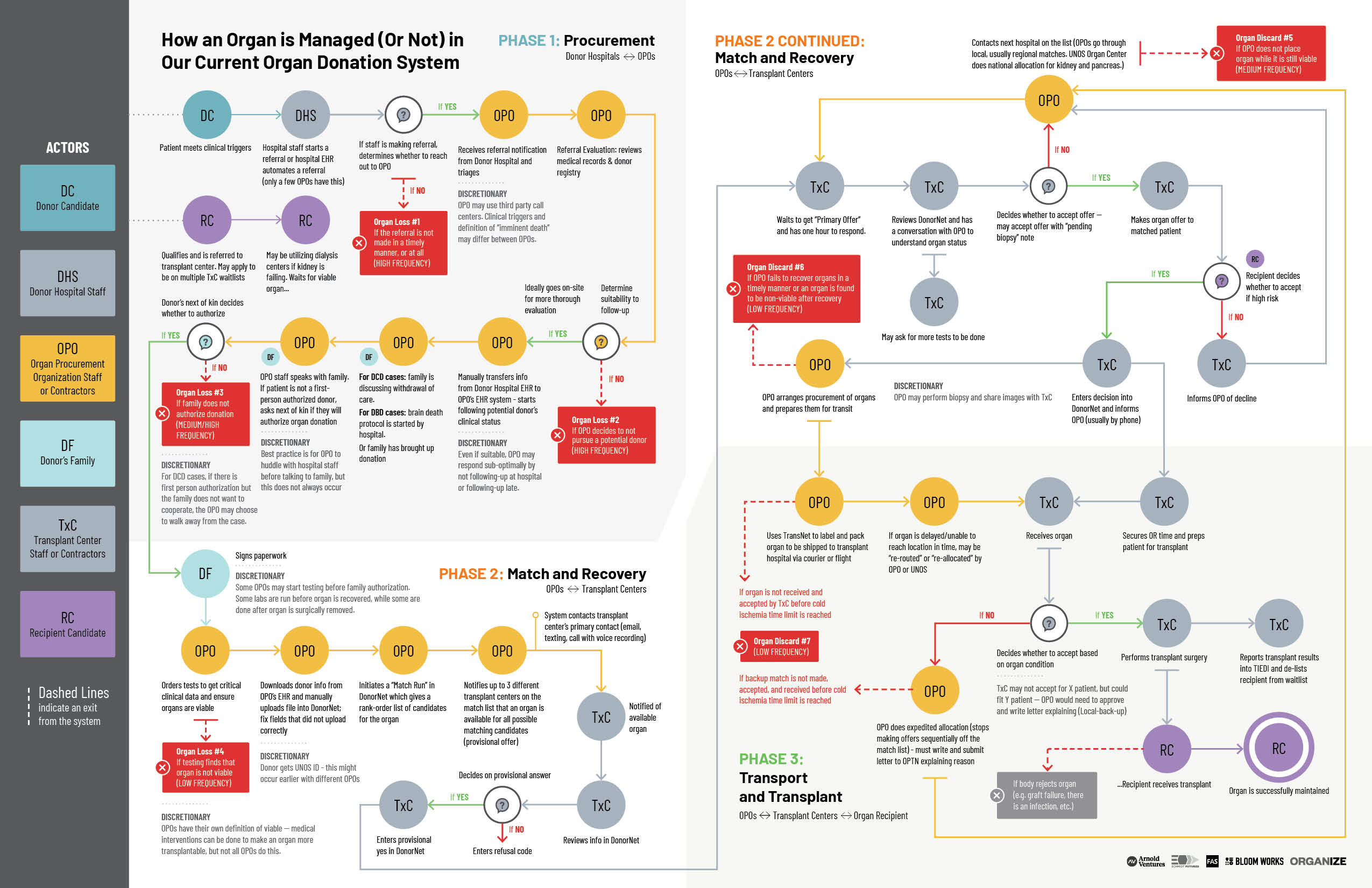 Many users we talked to stated that UNOS organ transplant technology felt dated and had frequent periods of downtime, or the system was extremely slow, where they had to rely on phone calls.

Further, the agency tasked with overseeing OPTN/UNOS has few tech staff to effectively audit or implement technical best practices. “We don’t have the in-depth IT staff to have an understanding [of] whether the things [that] are being built are good,” said one HHS official.

Another issue is the number of disparate software systems within the organ transplant tech community. Various contractors each handle their own system and data. This approach prevents a single overseer, like the OPTN, from collecting centralized data and making smarter, data-driven management decisions.

Most software used by UNOS is considered closed and proprietary, blocking any chance of innovation or competition from outside actors. This strongly goes against modern day best tech practices. (See “Tech Recommendations.”) And it has caused the organ donation system to miss the mark on moving the technology forward, blocking out a market of innovative technology options to tackle solvable problems.

With the current technology as an inhibitor, trying to implement a new policy can take over a year – resulting in lives lost and billions of dollars wasted.

The government (HHS/HRSA) is extremely limited in its ability to select which vendors can be awarded the OPTN contract, due to overly prescriptive specifications within NOTA. Thus the same vendor, UNOS, has been awarded the contract during every recompete for the past 34 years. These constraints limit progress in developing digital products and services with modern best practices to truly support the system. (See “Strategy for Buying OPTN Tech.”)

Additionally, as mentioned above, in the past 40 years, none of the OPOs in the U.S. have lost their federally-funded positions, despite clear evidence of underperformance.27

Where Do We Go From Here?

The good news is that many of these problems are solvable. We believe it is within reach to create a system that is less complicated and saves more lives and taxpayer dollars in the short and long term.

Below are key opportunity areas to increase the effectiveness of the organ transplant system.

Opportunities to modernize and remove conflicts from governance structure:

Opportunities for CMS to improve accountability in organ recovery and placement:

Medical professionals save nearly 100 lives every day with organ transplants.29 People currently waiting for a heart, lung, kidney, liver, or pancreas face the painful reality that the science exists to save them, and yet it’s an outdated, bureaucratic system that’s getting in the way. Employing a few structural changes could have a massive impact on the number of lives saved. 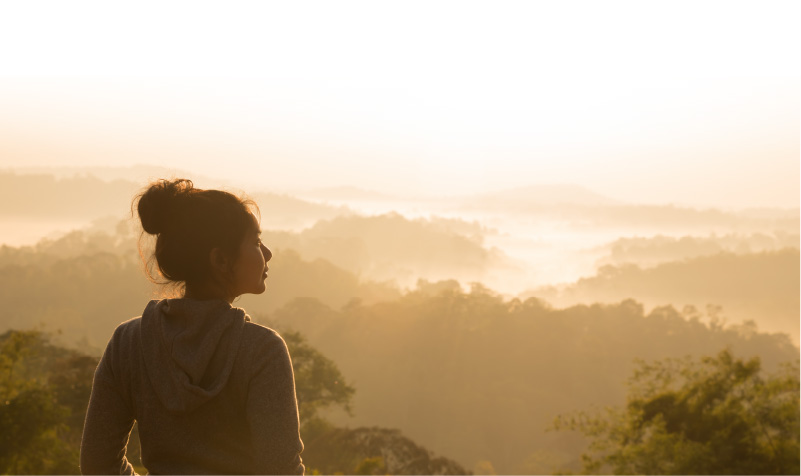 Bloom Works interviewed more than 30 people within the organ donation system, including OPO leaders and staff, organ specialist consultants, donor hospital staff, transplant surgeons, government officials, and researchers. This report is based on those interviews, case studies, and existing research, as well as the OPO Best Practices and Tech Recommendations reports compiled by our researchers.

Research was supported by Arnold Ventures and Schmidt Futures in partnership with Organize and the Federation of American Scientists.

Research supported by Arnold Ventures and Schmidt Futures in partnership with Organize and the Federation of American Scientists.